In this tutorial we are going to learn basics of Selenium IDE. First of all, Selenium is a browser automation tool for testing applications, which can be implemented in various programming languages, including C#, Java, PHP, Python or Ruby. It was developed by Jason Huggins in 2004, and from then it became a popular automated testing tool. It is very flexible and powerful tool, which can help you make test tasks/cases, which will ensure that one or another part of your application is working properly.

So what is Selenium IDE after all?

Selenium IDE is a fully integrated development environment implemented as extension, currently (developed and supported by Selenium creators) on Mozilla Firefox browser. This is one way of using Selenium and prefered for beginners, as it do not require for writing your own testing code in your application and also it has better learning curve in my opinion, because it is easier to debug if anything goes wrong in automation tasks, uses all available selenium commands and you can see everything in your actual browser when Selenium IDE ‘robot’ will be doing described tasks as we will see later.

Okay then! Let’s install Selenium IDE extension in our browsers. Currently as I am writing this tutorial the download link is here http://www.seleniumhq.org/download. Find Selenium IDE section, and click on latest stable version (now is 2.9.0), also make sure you’re using Mozilla Firefox browser when installing.

Now let’s open up what we have installed. Go to Firefox Menu -> Developer -> Selenium IDE.

Here’s how it looks like on 38.0.1 version Firefox version:

Or just simply use shortcut Alt+Ctrl+S to open it up quickly. 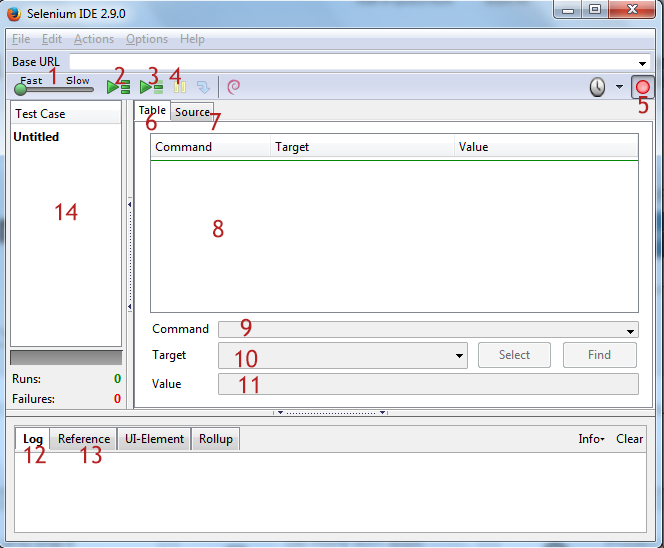 There are other options in Seleniu IDE window, but stated above are options that I use the most. 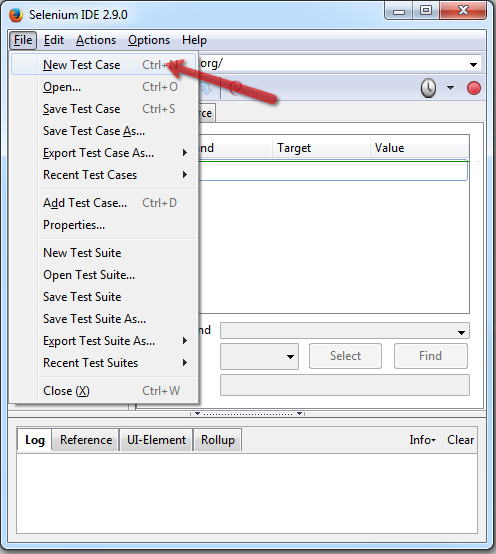 For this tutorial I made a basic form where we will make test. The reason why we will test on form, is because basically testing covers mostly forms, let it be a login form, contact form, order placement form, etc., where some more complex funcionalities will run in the backend. Of course tests can be done on various UI elements, but as I stated earlier, you will want to test forms the most. So let’s open up the form page I created:

It’s a simple form where if you fill all fields and click to submit, you will see success message and if at least one field will be empty, it will show error message.

Now let’s record our interactions with this form: 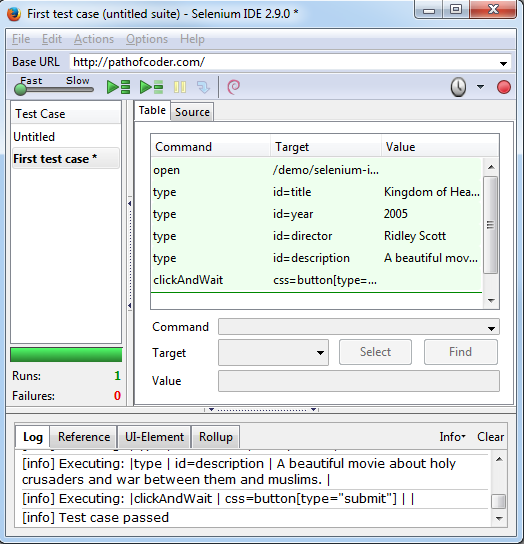 And that’s it, we created a simple selenium test, which took our actions and produced selenium commands.

Let’s take one step further: when we correctly fill the form, we want to see success message. For that we can manually write needed command called ‘assertText’: 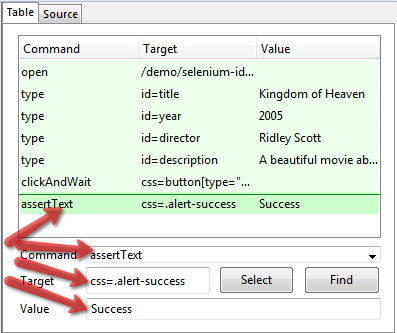 Now this same test case will ensure that the form is working correctly. If for example after submission of form would occur some error in the backend, like exception or, in production, same old blank page with 500 server error message, the test case would fail and stop further execution. Also all the details where and why it has failed could be seen in Log panel.

Let’s break down commands we used:

There are much more Selenium commands out there, so use this page as a reference next time you will be writing your own tests – http://release.seleniumhq.org/selenium-core/1.0.1/reference.html.

There are several ways how to locate an element. I most commonly use these:

It selects elements exactly like in css file. It is flexible and easy enough, especially if you know css well.

It selects elements by ID.

XPath Locator may sound to you a complex method to select an element, and indeed it is if you hear it for the first time… but for me, it’s the most flexible way of locating an element. XPath basically is a language for selecting nodes in XML document. For example elements can be selected by text and part of text, what css can’t do, and this is pretty powerful. It’s not a small topic to discuss, so just keep in mind if you will struggle selecting a super-hard-to-select element with css Locator, there probably is a way using XPath.

So simply said Selenium IDE is a great tool to ensure both yourself and your client, that most parts of the website is working as it should.

If you think this tutorial was helpful, or have a question to ask, let me know below in the comments.

Batch processing with Symfony and Doctrine

Find Out What’s New In PHP7